I went to Science World this weekend to see Roving Mars, a movie which held absolutely no interest for me. Nada. However, my mother-in-law and my daughter wanted to see an IMax, and this one happened to be playing in that critical window between snack time and nap time.

It was AMAZING. My mother-in-law fell asleep in the first ten minutes and my daughter thought the people were all make-believe. But I came out of the movie spouting martian water facts and space travel technologies.

What made the movie spectacular was the narration of this NASA geologist (I know… rocks… not usually interesting) who had spent most of his career building robots to travel the red planet. He was so passionate about his project that his obsession leaked through the movie screen and into me.

Which made me think… as long as you’re passionate about a topic, you could really make a book or movie about just about anything you wanted. 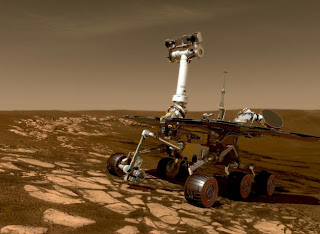