I spent yesterday afternoon at one of the Jazz Festival’s free outdoor concerts. As I’ve mentioned here before, I’m entirely musically illiterate, so my observations on the actual jazz are only: (1) it was fun, and (2) the trumpet player was cute. 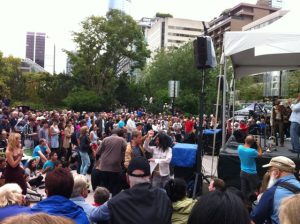 I spent most of my afternoon watching the people — the wide variety of salsa dancing “styles”; the wardrobe options, which ranged from multiple layers of Gortex to as little as legally possible; and the seating choices, from those who sat on other people’s toes (ahem), to the guy across the square who watched the concert from up a tree.

Near the front were three women with ripped arms, as if they made a Crossfit pact at Christmas and carried through. The slightly plumper one had a husband and child who danced nearby occasionally. The second woman was strikingly beautiful in metallic pants, halter top, and movie-star sunglasses. And the third was a sort of less-successful clone: a sundress that didn’t fit as well, sunglasses that weren’t quite movie-star, and dance moves that were trying too hard.

I couldn’t help thinking she might be happier if she spent time with more average-looking friends.

A long time ago, my dad told my teenage-self that I’d worry less what people thought of me if I stopped being so critical of others. There’s undeniable truth to that, and I think of his words fairly often. But “critical” is a harsh term. As for making observations, jumping to conclusions, and inventing people’s personalities based on their clothing choices… well, that’s sort of an occupational hazard.

And Jazz Fest is the perfect venue.