After reading The Owl and the Pussy Cat to my kids for the umpteenhundredth (real number) time, I decided to look up the author and find out whether he was on drugs. After all, “the land where the bong tree grows”?

The answer: no. Edward Lear was apparently not on drugs. According to the all-knowing Wikipedia, he was a depressed epileptic who happened to write nonsense poems on the side. 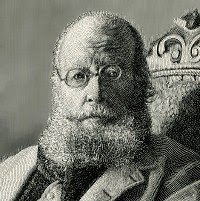 Does he look like he was on drugs? Difficult to say.

One other interesting fact: Edward actually invented the term “runcible.”

When I read the line, “they dined on mince and slices of quince, which they ate with a runcible spoon,” I thought, “Oh, that’s what those spoons are called.” Well, they weren’t called that until Edward made up the word.

I wonder if he ever used wubble?