It was complete snowpocalypse in Vancouver this weekend. We broke all the weather records. I shovelled the driveway three times on Saturday. The final time was at 8 p.m. and by the time I finished the driveway, the sidewalk was covered again. 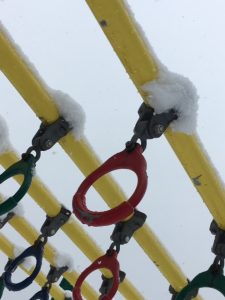 This all would have been fine and fun and lovely (it was pretty) except that I was right in the middle of Eric Walters’ Rule of Three trilogy. In those books, the world’s computers go off-line and civilization almost immediately breaks down.

This meant that by Sunday morning, I was classifying our neighbours by their snow-shovelling habits. Those people across the street? The ones from Toronto who should understand about clearing the sidewalks, but apparently don’t? I’m not sure they’ll be amenable to sharing food and resources. The guy in the green house, on the other hand, was across the road helping his neighbour clear a path for his car. He’s definitely on board the community “lifeboat.” And what about the mysterious good samaritan who shovelled a clear strip down both sides of the block before anyone else was awake? We’ll need to meet him.

I’ve finished the books, but Silence is now deep into the first instalment. We’re probably going shopping for canned food and chlorine tablets soon. As soon as the snow melts, at least.