As part of my quest to expose my half-Burmese children to more Asian protagonists, I picked up the first Alvin Ho book a couple weeks ago. My son loved it. He promptly checked out book two, Alvin Ho: Allergic to Camping, Hiking, and Other Natural Disasters, from the school library. 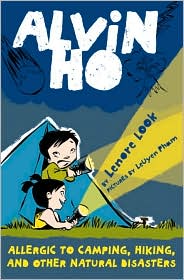 Now, I would happily have read these with or without Alvin’s Asian heritage — the books are hilarious. Alvin doesn’t speak at school, or when he’s scared, which leads to all sorts of scrapes. And which also led to this interesting conversation with my six-year-old:

Him: There’s a boy in my class who doesn’t talk.

Me: Oh. Do you think he gets nervous like Alvin?

Him: No. He just doesn’t talk.

Me: Maybe you could play with him, the way Flea plays with Alvin.

Him: He doesn’t need playing with. He just doesn’t talk.

This led me to conclude that (a) in my overprotective mother-bear state, I’m imagining problems that don’t exist or (b) six-year-olds have no empathy. Maybe a bit of both.

Anyway, shortly after, my daughter walked by just as we were reading about Alvin’s fried rice dinner.

And then my overprotective inner mother bear did a (secret) happy dance.