This week’s question at the CWILL BC blog is:

When you run out of ideas, where do you go for inspiration?

When I run out of ideas, I usually go for a run. It seems like the right idea… fresh air, new scenery, and a change of pace. It’s almost never successful.

Even when I set out with a problem to solve — how is that guy going to get out of the cave now that he has a broken leg and the flashlight’s gone out? — I only manage to think about it coherently for about three minutes. Then I might see a seagull.

I used to think it was a personal phenomenon. Then a friend gave me this book: 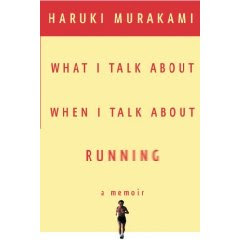 I only read about two chapters before I threw it in the direction of the ocean, but as far as I can tell, it’s a book about nothing. The same sort of nothing that is What I Think About, When I Think While Running.