I remember two books of poetry in the house while I was growing up. One was an ancient red-bound book of British ballads, some remnant of my dad’s high school days. The other was When We Were Very Young, by A. A. Milne. 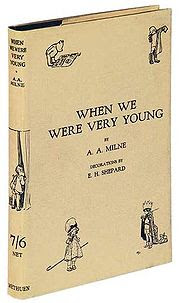 I still have both books, but I’ve only memorized one of them. And now my daughter can probably tell you about lions and bears off-by-heart as well. If you happened to be walking in a London street…
Most recently, the four-year-old and I have been reading The House at Pooh Corner at bedtimes, which is so absolutely wonderful that it makes me feel there’s no use writing anymore — the perfect children’s books already exist and can’t be replaced.

The four-year-old doesn’t quite understand the jokes until I explain them, and she doesn’t identify with Pooh quite the same way she does with Laura Ingalls, but who cares? I don’t… I’m laughing too hard when Christopher Robin’s note (“Gon Out, Backson”) leads to discussion of the Spotted and Herbaceous Backson.