David from Howe Sound Secondary School in Squamish wrote me a letter to tell me how much he enjoyed reading Truth. Thanks, David!

I replied to David’s letter and promised to answer his questions here:

Why did you write this book?
I wrote Truth after a man was killed at a Squamish house party. The police believed that many of the party goers knew who had killed him and were keeping it secret. Every reporter on TV seemed shocked by this. They couldn’t believe that other teens wouldn’t cooperate with the investigation.

Since I grew up in a small town and went to school with the same people from kindergarten until we graduated, I understood how students might feel compelled to protect their friends. I wrote Truth to explore the idea.

Will there be a sequel to the book?
I don’t see one in my future. But, I do have another book in the Orca Soundings series called My Time as Caz Hazard. Maybe you’d like that one. 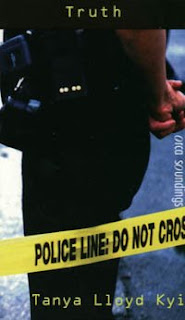