Yet another book I won’t be listing on my daughter’s reading olympics form.

I ordered The Elements of Murder from the library, and it’s actually quite fascinating — all stories of poisonous chemicals and the lunatics who used them. 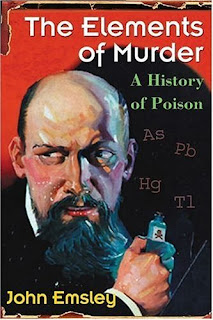 When I first saw it, I thought I must have accidentally ordered something ancient. Dear Oxford University press: there’s a difference between “retro” and “ridiculously old-fashioned.”

But maybe they were marketing to Agatha Christie fans…