This is a bit embarassing, but remember how I developed a little crush on Mars after the whole 3D IMax movie thing?

Last weekend, a news tidbit about the rovers caught my eye. One of them is stuck in sand, spinning its wheels. Lacking the three strong men with Dodge Rams and tow ropes that always worked in my hometown, NASA’s working on some alternatives. Including one suggestion from a seven-year-old boy named Julian. Seriously. 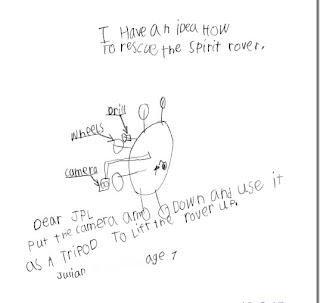 Shocking how many seven-year-olds are smarter than I am.