I recently finished reading The Spirit Catches You and You Fall Down, by Anne Fadiman. One of Min’s clients gave this to him, apparently thinking he was Hmoung instead of Burmese.

The book is an exploration of one Hmoung girl’s battle with epilepsy in southern California, where her parents rely on the advice of traditional spiritual healers, animal sacrifice, and herbs to heal her, while the medical establishment tries desperately (and unsuccessfully) to impose a regime of modern drugs. Spanning several years, Fadiman’s examination of Hmoung culture is detailed, fascinating, and totally, completely obsessed. 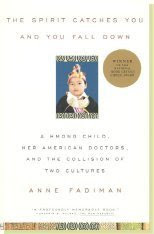 When I finished the book, I turned to The Snake Charmer, by Jamie James. This book was leant to me by one of the the other moms-of-preschoolers in my neighborhood who had received the book for Christmas and remembered that Min was from Burma.

(Neither the client nor the preschool mom seemed to realize that Min has only read one book in the last year, and it was by an ultimate fighting champion.)

Anyway, this new book is about a scientist who is fatally bitten by a krait while studying snakes in Burma. It’s a rollicking real-life adventure story of cobras and jungle marches and a a total, complete obsession. 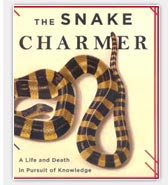 Just when I was thinking how odd it was that I’ve read two obsessive non-fiction books in a row, I happened to turn The Snake Charmer over and what do I find on the back cover? An endorsement by Anne Fadiman, author of The Spirit Catches You and You Fall Down. Which, as far as I can tell, has absolutely nothing in common with The Snake Catcher except for an overlap in OCD. Unless maybe the publisher also thought Hmoung people and Burmese people were the same?

Whatever the connection, both books are compelling and worthwhile reads. And if you find yourself washing your hands 20 times a day after reading, or turning the lock three times before opening your door, or ensuring your first step over the threshold is north-northwest, well, don’t say I didn’t warn you.