I received an exciting e-mail last week from a teacher in Prince Albert, Saskatchewan. Her grade eight class is going to be reading Truth in May. 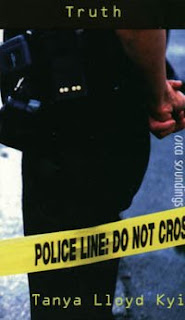 She sent me this question:
I have read that this story was inspired by true events. Could you please shed some light on this for me? Was it a particular murder that inspired you?

And here’s my answer:
Truth is entirely fictional, but it was inspired by a 1997 murder at a house party in Squamish, B.C. I searched for a link to the story and came up with this.

After the murder, there were all sorts of reporters wringing their hands and wondering why no teens were talking to the police, when there had been so many people at the house party and so many potential witnesses.

Maybe because I grew up in a small town where I went to class with the same kids from elementary school to graduation, it seemed conceivable to me that teens would try to protect one of their own, even after such a violent act. I’m not saying that they were right to do so, just that I could see possible reasons.

The novel was born to explore these ideas.